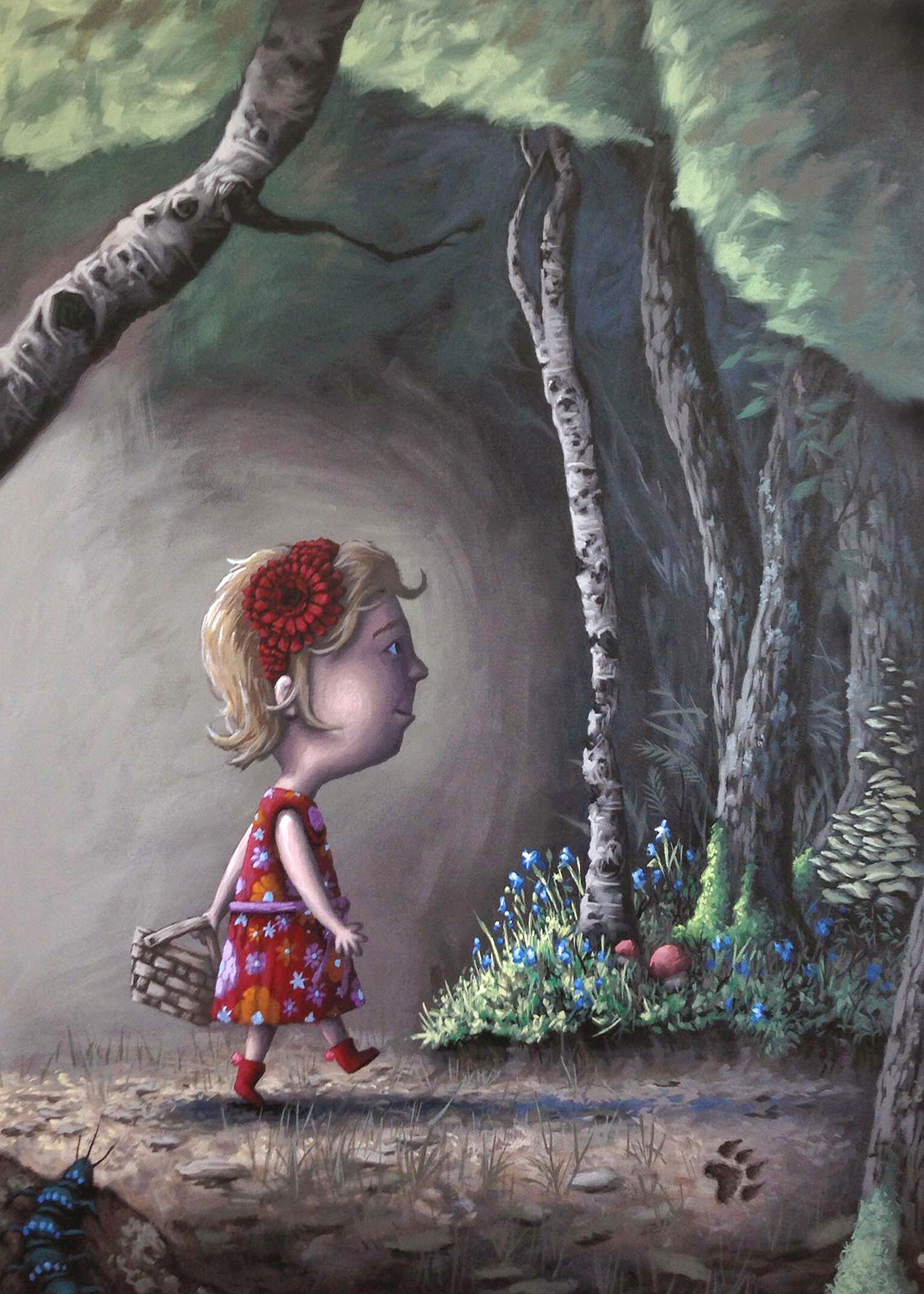 Get to know Jarrett…

Jarrett Rutland was born in Anniston, Alabama and spent time growing up both in Alabama and North Carolina. After art school at Maryland Institute College of Art, he bounced around until he landed in Brooklyn. There he launched his career with an internship and book deal with Henry Holt (ALLIGATOR WEDDING ’10). Later he moved to North Carolina and published I LOVE YOU NO MATTER WHAT (Tommy Nelson ’13). He is currently working on a number of book projects. He lives with his wife and black dog in Asheville, North Carolina. To learn more, visit his website.

What setting would you paint yourself into?

I don’t know that this is terribly unique, ha. I would definitely paint myself into a beach scene in the tropics. The water would need to be completely clear. Clear enough to see my feet and anything that could be creeping up on me within a fifty foot radius. There could be clouds in the sky as long as they weren’t blocking the sun.

What is the most shocking sight you’ve seen?

I saw a wreck where a Chevy Suburban was flipping toward the car I was in. It was popping off the ground like it was on a trampoline. Glass, papers were flying everywhere. It was surreal.

What one word describes the 80’s?

I’m not a fan of the 80s as a decade, style, music, “art”, so to quote the great Michael Jackson I would use the word “bad”. Ha! Joking aside, I prefer to remember having a great family who cared about me. My mom took me to Little Caesar’s pizza after soccer. My Gramma took me to “Discovery Zone” and I learned about dinosaurs and the pyramids. My “Pa” bought me any little thing, including candy, I ever asked for while we were out! I was very blessed.

What would you do if you wanted to annoy someone?

I forget, but my wife would know!

Ever broken any bones?

I broke my drawing wrist. Later on I tore ligaments and had complications from surgery. All told I had three surgeries on that same wrist. It was a struggle in every way. It was one of the biggest lessons that taught me life was not fair and you play with what you’re dealt. That wrist is about 80% at its best. I still have significant pain sometimes, but most of the time it is very manageable and I count my blessings. I also broke my ankle playing soccer.

What celebrity resembles a martian?

Is Glenn Beck a celebrity? I don’t want to insult anyone’s appearance, but often times the things that come out of people’s mouths have you wondering what planet they are living on.

What would you sell at an auction?

The things I own that would sell for the most at an auction, I wouldn’t sell. Therefor, I would try to sell some of my art to clear storage space.

Strongest bond with an inanimate object?

The bible my Pa gave me, that he used during most of his career as a pastor. It’s worn, has his notes in it, and if I lost it, I would never forgive myself.

What song could you listen to on repeat?

Battle Hymn of the Republic.

I will ever know. (I feel that applies to all of us.)

Pete: You miserable little snake! You stole from my kin!

Everett: Who was fixin’ to betray us.

Pete: You didn’t know that at the time.

Everett: So I borrowed it til I did know.

Pete: That don’t make no sense!

Everett: Pete, it’s a fool who looks for logic in the chambers in the human heart. What’s that sound?

Delmar: Sounds like a choir. Care for some gopher?

Everett: No thanks, Delmar. Third of a gopher would only arouse my appetite before bedding her back down.

Delmar: Oh you can have the whole thing. Me and Pete ran across a whole… gopher… village. 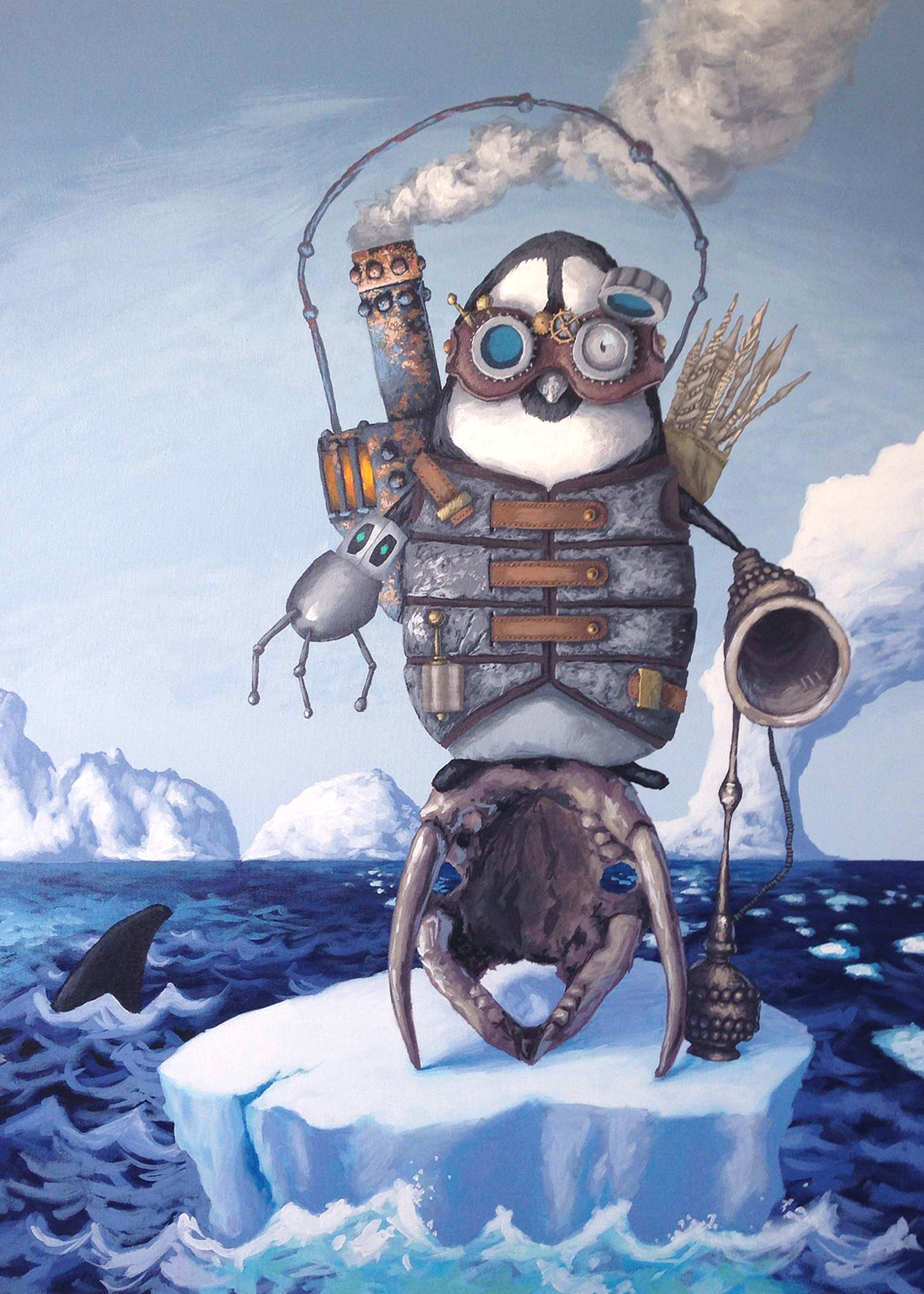 If your illustrations were edible, what would they be?

Did your childhood influence the way you illustrate?

I think so. I was very influenced, growing up, by what people thought of me. And since the general public thinks the greatest art is painting or drawing something to be hyper-realistic, it gave me pride when I could do that. Evolving into the artist I am today, the rendering aspect is not so much driven by the public’s reaction anymore, rather a vehicle to achieve my fine art style when combined with my concepts. I’ve pretty much narrowed my mediums down to acrylic, which is more fine art, and the light watercolors, which I use for book art.

Do your illustrations reflect your personality?

I think inevitably someone’s work is going to reflect their personality, if they are self-examining and making their own decisions. In art school, there were several classes in which the phrase “it’s all been done before” circulated every other minute. Later on as I contemplated that philosophy, I thought of an answer to those people: “then why are you here at art school?” It’s a ridiculous sentiment that needs to go away. The beauty of humans is they re-create, they invent, they evolve, they grow in knowledge and creativity. They can concoct new ways to see the world, and they do, every day. I hope my work does that for other people. They tell me it does, and nothing makes me happier.

Which of your projects gives you the most pride or satisfaction?

How would you define creativity?

I would say, by mastering the art of living life on your terms. And I don’t mean anything selfish. It’s more about finding ways to refuse to let your God-given potential be broken.

How do you know when a project is finished?

What drew you to a career in illustrating rather than a job that would offer more financial stability?

First off, I refuse to believe I can’t have financial stability. And as for what drew me to illustrating, I love it. Also, I have other outlets with my art other than illustrating books, for income. Yes, I have questioned that decision.

How do you think you differ from other illustrators?

I have no idea. I love football, soccer, a lot of mainstream stuff. Most artists balk at that. I’m a protestant. Many artists are against or mock that. So maybe those things? At the same time, I realize there are many stereotypes incorporated into all that, and any person who can’t get to know someone based on the content of their character, instead of how they dress, what they believe or what makes them happy, is an opinion I couldn’t care less about.

If you’re referring to how I approach my art technically, not sure about that either. But maybe; it’s very frustrating to me, for my heart to say what it wants to say, through one medium alone?

If you were no longer able to illustrate, how else would you express your creativity?

GREAT question. Aside from writing which I do, I would probably say music. Then soccer, basketball, football, mission work. The best in any field exercise their creativity every day. Have you seen Lionel Messi score a goal? Or Barry Sanders run with the football? It’s an art form, when anyone takes something extremely difficult, and makes it look breathtaking.

What has been your greatest sacrifice that has enabled you to become the illustrator you are today?

If you only had one last opportunity to express yourself creatively, what message would you convey to others?

I would find someone obscure, profound way of saying how much my heart cries out for peace between every nation, every creature, every person. The only thing cliche about world peace or peace between one person and another, is when someone who doesn’t mean it, says it.

Can you share some words of wisdom for someone starting out in the field of illustrating?

Can I expand it to the field of art in general? Don’t limit yourself. And don’t buy into all the crap you hear. There’s plenty. Make your own way, by being yourself and following what makes your heart sing. Latch onto the small gems of wisdom you are able to extract. Seek it. The more you seek it, the better you’ll be able to distinguish what is gold and what is dirt.

Welcome Turfers! Ever wondered why Jack Gantos is self-conscious about wearing a cat suit? Or whether or not Lauren Oliver tips for take-out? Or maybe you’ve wondered what Jerry Spinelli would do if it were his last day on earth. If so, you’re in luck. With over 400 author interviews to explore, your strange inquiries will be quelled. You’ve been warned!