Get to know April…

April Chu began her career as an architect with a degree from the University of California, Berkeley, but decided to return to her true passion of illustrating and storytelling.  She recalls spending most of her childhood drawing whimsical characters in her notebook after school every day, and she hasn’t stopped drawing ever since. She has illustrated two children’s books: Summoning the Phoenix: Poems and Prose about Chinese Musical Instruments (Shen’s Books, an imprint of Lee & Low Books, Spring 2014) and Village by the Sea (Creston Books, Spring 2015). April currently lives and works in Oakland, California. For more information, visit her website.

What bad habit will you purposely never quit?

Online shopping is my weakness and a bad habit (I do it WAY too often) but I need some good retail therapy sometimes, especially after a grueling deadline.

If you had to choose, what is the most important quality in a relationship—humor, smarts, personality, looks, money, or mutual interests?

I would say personality because if I like your personality, there is a good chance that you are funny, witty, sarcastic, motivated, interesting, kind, and in general, someone I enjoy hanging out with.  It covers more ground.

If you could add one feature to your cell phone, what would it be?

If you could invent one modern convenience, what would it be?

I would invent a teleportation machine because I am always late to appointments, parties, meetings, etc. It would save me loads of time if I could just be teleported to my destination. However, for some reason, I feel like somehow I would still be late…

What is one thing you probably shouldn’t wear to a fancy restaurant?

My retainers.  Yes, it has been many, many years since I’ve had braces and I am still diligent about wearing my retainers at night. But taking them out of my mouth before eating is kind of gross for me and probably for people sitting around me.

What kitchen appliance is the least useful in your life?

Surprisingly my KitchenAid mixer, which I had wanted one for so long because it seems like a staple in everyone’s kitchen. But I hardly ever bake so now it just collects dust on my counter.

What always gets stuck in your teeth?

It’s a tie between pulled pork and mango fibers.

What object in your home are you the most embarrassed about owning?

My enormous shoe collection.  No one human being should own that many pairs of shoes!

What are you thankful you’re not doing right now?

I am so glad that I am not doing kettlebell exercises. At the beginning of the year, I joined this awesome gym near my house and the training sessions seriously kick my butt every single time. I have learned to do many cool exercises using gym equipment that I was always too afraid to try, one of them being kettlebell exercises. The classes are brutal, but I always feel great afterward.

Who is the most famous person you’ve ever met?

I’ve never actually met a celebrity or someone famous. The closest I ever came to meeting a celebrity was when I was on a business trip in North Carolina and Chris Rock was in my hotel lobby. He seemed like he was in a bad mood so I was too intimidated to approach him for an autograph.

If you were to act on a whim right now, what would you do?

What is the greatest Christmas movie ever?

Ah!  It’s hard to choose one so I am listing two: It’s a Wonderful Life and Elf.

Sitting by the beach while sipping on a Mai Tai. 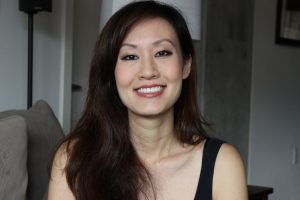 Have you ever felt that your personal expectations have limited your creativity?

I think it’s important to keep up with what your peers are doing in the industry and to gather inspiration from them and it’s so easy to do that with blogs, Facebook, Twitter, and other forms of social media. But sometimes I do get caught up in the whole “Should I be doing that?” or “Why am I not doing that?” mentality, and it definitely impedes my creativity.  I find the best thing to do in that situation is to shut off the Internet and remind myself that everyone’s path in this career is unique, just like how everyone’s artistic style is unique.  It’s important to stay true to myself and focus on what I enjoy doing the most, which is illustrating.

Do you ever feel that you have to censor your creativity because you don’t want to offend anyone?

Not yet, but maybe someday when I work on something edgier perhaps.

Do you do anything special to get your creative juices flowing?

Sometimes the best way to get the creative juices flowing for me is to remove myself from my illustration work entirely.  I love daydreaming, traveling, and spending time with my family and friends.  You wouldn’t believe some of the great ideas that sprouted over a glass of wine and a funny conversation.

What obstacles have you had to deal with in your career?

What are the biggest challenges you have had in the realm of illustrating?

The biggest challenge I’ve had so far is treating illustrating as a job where I have to wear many hats.  Not only do I have to produce work, but I also have to set goals and deadlines, market myself, and maintain a steady workflow.  It’s so difficult to peel myself away from illustrating (fun part) to do some self-promoting (not so fun part), even though I realize that it’s all part of the job.

What life experiences have inspired your work?

One of my favorite childhood memories is watching cartoons and animated movies after school every day (after I finished my homework, of course!) because that’s how I discovered my love of drawing.  My parents bought me almost all of the Disney movies on VHS and I never seemed to get tired of them. I seriously watched Disney’s Sleeping Beauty over 300 times!  While I am watching the movie, I would practice drawing the characters so that later I can create my own spin on the stories.  And I still find inspiration in animated films.  Every year if I know that the Oscar-nominated animated short films are playing anywhere nearby, I am so there!

When did you know for certain that you wanted to pursue a career in illustrating? Have you ever questioned that decision?

I am an architect by training but for the last several years I’ve been contemplating starting a career in illustrating. I didn’t formally pursue it until January 2012 and I’ve never looked back or questioned my decision.

What are your words of wisdom for someone starting out in the field of illustrating?

Never give up and always remember to have fun!

How do you know when a project is finished?

The ideal situation is luckily what happens most of the time.  I usually reach a point when I’m working on an illustration when I know if I continue working on it that it will actually detract or not add anything significant to what I am trying to express.  The less ideal situation is when I am somewhat forced to finish a project.  For example, when I am just tired of working on something or I am running out of time when the deadline is rapidly approaching.

What impact (good or bad) do you think the media has had on your work?

I believe the media will always have a positive impact on my work. One of the challenges of this profession is somehow getting your work out there so that people will notice and remember your work…so the more exposure, the better.

How would you define creativity?

Being able to look at things differently.

What drew you to a career in illustrating rather than a job that would offer more financial stability?

Illustrating is something I have been passionate about ever since I was young.  A few years ago, I was at a point in my life that I knew I could take the plunge and work on my illustration career.  I knew that I would regret it immensely if I didn’t take that opportunity.  I strongly believe that people deserve to pursue something that they love doing because it makes them happy.

Who do you consider a creative genius?

Again I have to go with 2 choices.  I am a huge fan of Pixar and I think John Lasseter, Pixar’s Chief Creative Officer, is a genius. I live close to Pixar’s office and would love to meet him one day. My second choice is Japanese animator Hayao Miyazaki. I don’t think an explanation is needed for that choice!

Welcome Turfers! Ever wondered why Jack Gantos is self-conscious about wearing a cat suit? Or if Lauren Oliver tips for take-out? Or maybe you've wondered what Jerry Spinelli would do if it were his last day on earth. With over 400 author interviews to explore, your strange inquiries will be quelled. Enjoy!