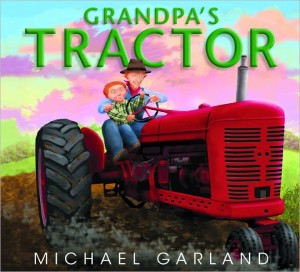 Get to know Michael Garland…

Michael has also illustrated for celebrity authors such as James Patterson and Gloria Estefan. Recently, he was included on the list of the top one hundred Irish Americans by Irish American Magazine.

When Michael isn’t illustrating, he paints traditional oil paintings for sale in galleries. His paintings have been featured in two issues of American Artist Magazine.

Let’s start off with an embarrassing moment. Got any?

I was a young altar boy, holding a huge candle, leading a Stations of the Cross procession on Good Friday. Musical prompts from the church organist were my signal to proceed to the next station. The procession was supposed to stay in the same place twice, but I forgot about that. When the music started again, I marched solemnly, by myself, toward the next station. It wasn’t until I turned the corner and looked over my shoulder that I noticed the scowling priest and the other altar boy frozen in place. I sheepishly scuttled back to my place, to the great amusement of the smiling congregation.

What is the oldest item you own?

A small watercolor painting by JH Clare. It belonged to my grandmother, who emigrated from Ireland when she was fourteen to work as a servant in Manhattan and Raquette Lake, NY in the summers. She bought the painting in a second-hand shop in the city because it reminded her of home. I found the picture while looking through some old books with my father. He gave it to me and I hung it in our home. It reminds me of my father and my grandmother. The painting is signed JH Clare, 1874.

A few years ago, on a family vacation to Ireland, I came upon a spot that looked exactly like the scene in the painting. I felt as though I had been there before (maybe in a dream). If you look closely at the finely-detailed picture, you can see a thatched cottage, with a mother and child sitting on the lawn by a lake with a rowboat waiting for a rower. When I look at this painting, I imagine JR Clare sitting by the rocky shore of an Irish lake, painting away, hoping someone will like his work.

It’s time to start a new trend. What will it be?

What great idea did you come up with, but never followed through on?

If you could be a spokesperson for any product, it would be:

Artistic License, the product that lets you do anything you want.

If you went to a psychiatrist, what would he/she say you suffer from?

Is there a place where you feel most creative?

No, in fact, the more boring and mundane my circumstance, the more I retreat into my own creative space. I have a beautiful studio with views, a soaring ceiling and skylights. I happily create there, but I could just as well be waiting in an airport or holed up in some hotel.

Is there someone who encouraged you when you felt like quitting?

First, it was my parents who believed in me, then my wife Peggy, but ultimately I had to believe in myself.  There is no roadmap for a career in the arts. The lives of other artists and writers, seen from a distance, are an illusion. They may serve as inspiration, but not always as a practical model.

What has been your greatest sacrifice that has enabled you to become the artist you are today?

Spending many, many long hours doing various freelance jobs that I would rather not have done, but the income from those jobs allowed me to remain a freelancer and work toward projects that I really love doing. Even with the most tedious, routine assignment, there is something to be learned. I never just “mail it in.” I always aim for artistic quality and client satisfaction.

Any words of inspiration to pass along?

I get up early. I work until late in the day writing or illustrating or painting, then go off for a hike or to play golf. My routine is broken when I do author visits or lectures. I travel all over the country.

How much of your own life is reflected in your work?

My life is reflected in my work. I won’t write anything unless I find it interesting or amusing. My first three books (My Cousin Katie, Circus Girl and Diner At Magritte’s) feature each of our three children as models for the protagonists. In Tugboat from Holiday House, I used myself as the model for the tug captain.

Do your family members enjoy writing/illustrating too?

My father was a New York City policeman, but he wrote verse. It seemed like a natural thing to me. Of course, we are Irish, so my father being a policeman-poet was no surprise to anyone.

Did your upbringing influence the way you write today?

Reading was always important around our house. Both my parents were always working on a book. Before I could even read, I’d look at books from our bookcase like Robinson Crusoe, illustrated by the Read brothers, or Moby Dick illustrated by Rockwell Kent High. Those same books sit on my bookshelf now. High standards in school were expected.

Which of your books gives you the most pride?

I am most fond of my first three books because of the connection to our children, but the most satisfying book is always the book I am working on at the monument because while I’m working on it, I always believe it will be my best book yet.

Welcome Turfers! Ever wondered why Jack Gantos is self-conscious about wearing a cat suit? Or if Lauren Oliver tips for take-out? Or maybe you've wondered what Jerry Spinelli would do if it were his last day on earth. With over 400 author interviews to explore, your strange inquiries will be quelled. Enjoy!